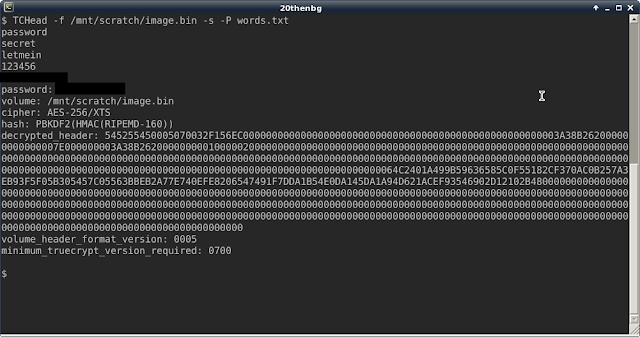 TCHead is software that decrypts and verifies TrueCrypt headers. TCHead supports all the current hashes, individual ciphers, standard volume headers, hidden volume headers and system drive encrypted headers (preboot authentication).
Brute-force TrueCrypt : However, TrueCrypt passwords go through many iterations and are strengthened. Cracking them takes time. Very strong passwords will not be cracked. Also, in addition to trying multiple passwords an attacker must try each password against each combination of hash and cipher (assuming they do not know what these are beforehand). System encrypted hard drives use only one hash and cipher, so attacking those is faster.
Testing TCHead: Create a TrueCrypt volume using the default hash and cipher (RIPEMD-160 and AES), set the password to "secret", then run TCHead against it like this and it will decrypt the header (provided that the word "secret" is in the word list)
Command : TCHead -f name_of_volume.tc -P words.txt
Decrypt hidden volumes:
Command : TCHead -f name_of_volume.tc -P words.txt --hidden
Multiple passwords (brute-force): Create or download a list of words in a text file (one word per line) using words that you think are likely to decrypt the header, then run TCHead against it like this. If the correct password is found, the header will be decrypted:
Command : TCHead -f name_of_volume.tc -P words.txt