[SET v5.1] The Social-Engineer Toolkit codename “Name of the Doctor” 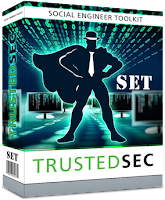 The Social-Engineer Toolkit (SET) version 5.1 codename “Name of the Doctor” has been released. This version adds a complete rewrite of the MSSQL Bruter as well as a new attack vector utilizing the PSExec functionality within Metasploit.
The MSSQL Bruter now incorporates UDP port 1434 quick discovery by sending a specially crafted packet to MSSQL servers and returning the port automatically. This technique eliminates the need to port scan and quickly identifies the SQL server as well as what port the SQL server is listening on. In addition, SET has moved away from the _mssql python module and towards impacket from Core Security. Main reason for this is due to some instabilities in later versions of _mssql with execute_query() being broke as well as the functionality built into impacket makes it much easier to use.
In addition to utilizing impacket, originally in SET you had two options for payload delivery, the first being POwerShell and the second the binary 2 hex debug conversion attack vector. This has been changed to automatically detect if PowerShell is installed on the victim machine, if it is – SET will automatically deploy a PowerShell injection technique that has been completely rewritten in the MSSQL module. If it does not detect PowerShell, it will automatically revert back to the debug. Lastly on the MSSQL Bruter portions, performance has been increased significantly on the brute forcing, discovery, and deploying of payloads.
For a video of the features, check out below:
Vimeo: Video
A new attack vector build into SET is the new psexec attack vector inside the Fast-Track menu. During a penetration test, often times you may have credentials to a server and want Meterpreter on a wide scale level. The psexec traditional module gets picked up by Anti-Virus due to known signatures being used. You can either use the EXE::Custom advanced feature however it still doesn’t give you the ability to select RHOSTS (multiple IP addresses) unless you custom script it or through something like railgun. The newer module “psexec_command” allows you to specify RHOSTS as well as execute a command on the operating system. Inside of SET, the psexec attack vector will automatically created a meterpreter backdoor through PowerShell and deploy it to systems you have permission to (RHOSTS). You can either use a username and password that you’ve decrypted or the hash for the pass the hash attack vector.
In addition to the new attack vectors, a number of other improvements, bug fixes, and enhancements have been made in this release. For more on all of the changes, check out the changelog before: