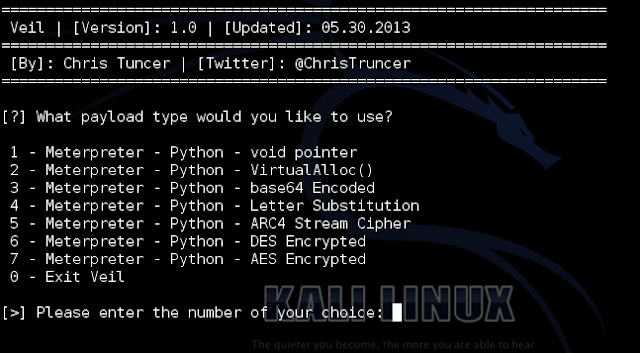 Veil was designed to run on Kali Linux, but should function on any system capable of executing python scripts. Simply call Veil from the command line, and follow the menu to generate a payload. Upon creating the payload, veil will ask if you would like the payload file to be converted into an executable by Pyinstaller or Py2Exe.

If using Pyinstaller, Veil will convert your payload into an executable within Kali.
If using Py2Exe, Veil will create three files:
Move all three files onto your Windows machine with Python installed. All three files should be placed in the root of the directory Python was installed to (likely C:\Python27). Run the batch script to convert the Python script into an executable format.
Place the executable file on your target machine through any means necessary and don't get caught!
Download Veil v1.2
Etiquetas: EN, Linux, Metasploit, Payloads, Veil, Windows
Share:
Entrada más reciente Entrada antigua
Loading...