NetworkMiner is a Network Forensic Analysis Tool (NFAT) for Windows (but also works in Linux / Mac OS X / FreeBSD).
NetworkMiner can be used as a passive network sniffer/packet capturing tool in order to detect operating systems, sessions, hostnames, open ports etc. without putting any traffic on the network.
NetworkMiner can also parse PCAP files for off-line analysis and to regenerate/reassemble transmitted files and certificates from PCAP files. 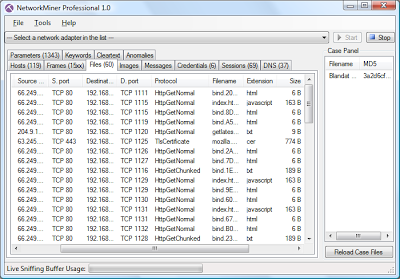 A professional edition of NetworkMiner is available for purchase from NETRESEC
The free edition is available here: NetworkMiner_1-4-1.zip.
NetworkMiner collects data (such as forensic evidence) about hosts on the network rather than to collect data regarding the traffic on the network. The main user interface view is host centric (information grouped per host) rather than packet centric (information showed as a list of packets/frames).
NetworkMiner can extract files and certificates transferred over the network by parsing a PCAP file or by sniffing traffic directly from the network. This functionality can be used to extract and save media files (such as audio or video files) which are streamed across a network from websites such as YouTube. Supported protocols for file extraction are FTP, TFTP, HTTP and SMB.
User credentials (usernames and passwords) for supported protocols are extracted by NetworkMiner and displayed under the “Credentials” tab. The credentials tab sometimes also show information that can be used to identify a particular person, such as user accounts for popular online services like Gmail or Facebook.
NetworkMiner Professional USB flash drive
Another very useful feature is that the user can search sniffed or stored data for keywords. NetworkMiner allows the user to insert arbitrary string or byte-patterns that shall be searched for with the keyword search functionality.
Download NetworkMiner 1.4.1
Etiquetas: EN, Forensic, Forensics, Linux, Mac, NetworkMiner, NFAT, Sniffer, Windows
Share:
Entrada más reciente Entrada antigua
Loading...