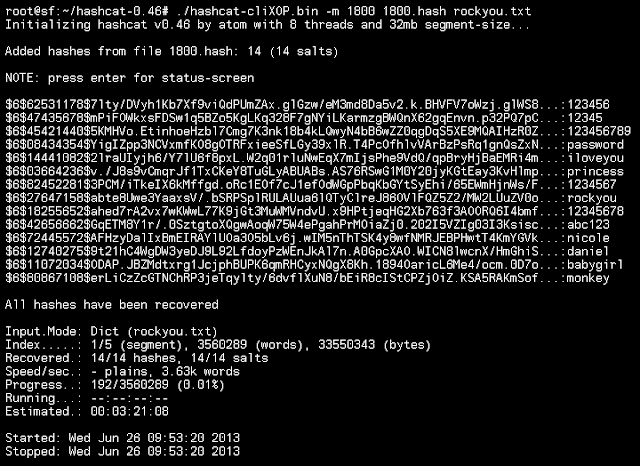 hashcat claims to be the world’s fastest CPU-based password recovery tool, while not as fast as GPU powered hash brute forcing (like CUDA-Multiforcer), it is still pretty fast.
hashcat was written somewhere in the middle of 2009. Yes, there were already close-to-perfect working tools supporting rule-based attacks like “PasswordsPro”, “John The Ripper”. However for some unknown reason, both of them did not support multi-threading. That was the only reason to write hashcat: To make use of the multiple cores of modern CPUs.
Granted, that was not 100% correct. John the Ripper already supported MPI using a patch, but at that time it worked only for Brute-Force attack. There was no solution available to crack plain MD5 which supports MPI using rule-based attacks.
Hashcat, from its first version, v0.01, was called “atomcrack”. This version was very poor, but at least the MD5 kernel was written in assembler utilizing SSE2 instructions and of course it was multi-threaded. It was a simple dictionary cracker, nothing more. But it was fast. Really fast. Some guys from the scene become interested in it and after one week there were around 10 beta testers. Everything worked fine and so requests for more algorithm types, a rule-engine for mutation of dictionaries, a windows version and different attack modes were added. These developments took around half a year, and were completely non-public.
Features
Detailed documentation and command line switches can be found here – hashcat.
Download Hashcat v0.46
Etiquetas: Cracking, EN, Hash, Hash Cracker, Hashcat, Linux, Windows
Share:
Entrada más reciente Entrada antigua
Loading...