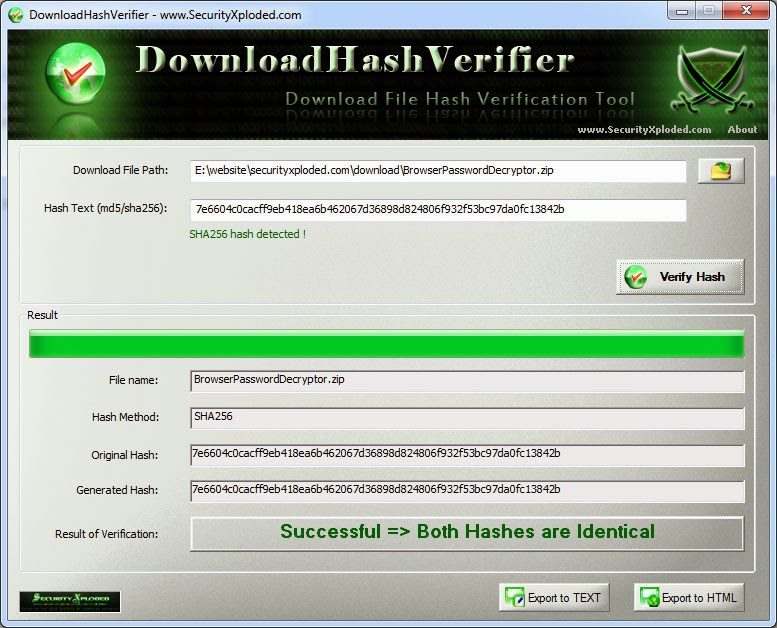 Download Hash Verifier is the FREE tool to verify the integrity of your downloaded file.
It makes file hash verification easier and quicker with its smart features such as 'Auto Hash Detection', 'Drag & Drop File', 'Instant copy from Clipboard' etc
Hash verification is a standard mechanism used to verify that downloaded file is original and not tempered. Often it happens that hackers modify the download files on the server and plant it with trojans/spywares.
Upon downloading and installing such softwares your PC will get infected eventually. To prevent such things, websites generally publish MD5 or SHA256 hash of the original file so that you can verify the same after you have downloaded the file. This will ensure that in case of any tempering with the file, end user will come to know about it and possibly alert the website administrator.
DownloadHashVerifier is designed to make this verification task easier and faster for end users. It supports both MD5 and SHA256 hash verification methods so you don't have to use multiple tools. Also it can automatically differentiate between MD5 & SHA256 hash methods without user explicitly mentioning it
It works on wide range of platforms starting from Windows XP to latest operating system Windows 8.
Download DownloadHashVerifier v3.5
Etiquetas: Download Hash Tool, EN, File Integrity Tool, Hash Verifier, Md5 Hash Tool, SHA256 Hash, Verify Md5 Hash, Verify SHA256 Hash, Windows
Share:
Entrada más reciente Entrada antigua
Loading...