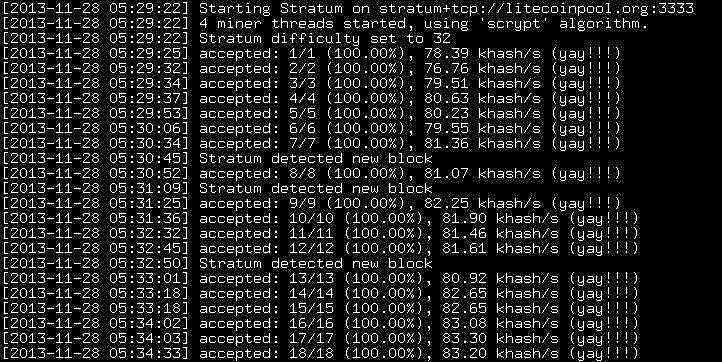 cpuminer is a multi-threaded, highly optimized CPU miner for Litecoin, Bitcoin and other cryptocurrencies. Currently supported algorithms are SHA-256d and scrypt(1024, 1, 1).

Notes for AIX users:
* To build a 64-bit binary, export OBJECT_MODE=64
* GNU-style long options are not supported, but are accessible
via configuration file

Architecture-specific notes:
ARM: No runtime CPU detection. The miner can take advantage
of some instructions specific to ARMv5E and later processors,
but the decision whether to use them is made at compile time,
based on compiler-defined macros.
To use NEON instructions, add "-mfpu=neon" to CFLAGS.
x86: The miner checks for SSE2 instructions support at runtime,
and uses them if they are available.
x86-64: The miner can take advantage of AVX, AVX2 and XOP instructions,
but only if both the CPU and the operating system support them.
* Linux supports AVX starting from kernel version 2.6.30.
* FreeBSD supports AVX starting with 9.1-RELEASE.
* Mac OS X added AVX support in the 10.6.8 update.
* Windows supports AVX starting from Windows 7 SP1 and
Windows Server 2008 R2 SP1.
The configure script outputs a warning if the assembler
doesn't support some instruction sets. In that case, the miner
can still be built, but unavailable optimizations are left off.