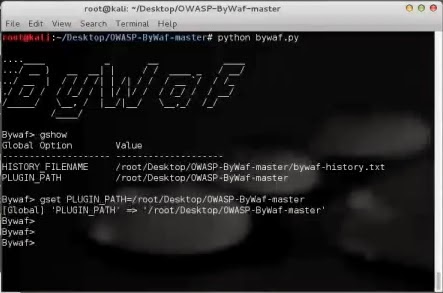 ByWaf is a Web Application Penetration Testing Framework (WAPTF). It consists of a command-line interpreter and a set of plugins. This program is free software: you can redistribute it and/or modify it under the terms of the GNU General Public License.
The Bywaf application is built on Python’s built-in cmd.Cmd class. Cmd is a lightweight command interpreter loop that provides several useful facilities for the developer, including overridable hook methods and easy addition of commands and help. For the user, it offers commandline editing with readline, including automatic tab completion of commands, command options and filenames.
Bywaf contains a sub-classed version of Cmd called Wafterpreter, which adds some important additions, including:
Wafterpreter API and utility methods:
The Wafterpreter API encompasses methods used by both the plugins as well as the Wafterpreter’s own methods; this allows for plugins to refining its behavior by assigning their own methods in their place.
Utility methods are time-saving shortcuts; while the API methods are the preferred way to change the interpreter’s behavior and to perform queries for jobs.
Download ByWaf
Etiquetas: ByWaf, EN, Linux, Python, WAPTF, Web Application Penetration Testing Framework
Share:
Entrada más reciente Entrada antigua
Loading...