360-FAAR (Firewall Analysis Audit and Repair) is an offline, command line, Perl firewall policy manipulation tool to filter, compare to logs, merge, translate and output firewall commands for new policies, in Checkpoint dbedit, Cisco ASA or ScreenOS commands, and its one file!
Changes: This release adds the 'mergelog' mode to merge binary log entries from one config with another and significantly updates the user interface. All configs can be loaded from the 'load' menu instead of specifying them on the command line. Added 'verbose' switches to 'print' and 'rr' modes so that screen output can be switched off, and all 'end.' key words have been changed to simply '.' to reduce the number of keystrokes needed. Entering '0' now adds all options and '.' chooses the default if available. The Netscreen output stage now uses a default zone if none are specified.
Read Policy and Logs for:
Checkpoint FW1 (in odumper.csv / logexport format),
Netscreen ScreenOS (in get config / syslog format),
Cisco ASA (show run / syslog format),
360-FAAR uses both inclusive and exclusive CIDR and text filters, permitting you to split large policies into smaller ones for virutalisation at the same time as removing unused connectivity.
360-FAAR supports, policy to log association, object translation, rulebase reordering and simplification, rule moves and duplicate matching automatically. Allowing you to seamlessly move rules to where you need them.
Download 360-FAAR Firewall Analysis Audit And Repair 0.4.1 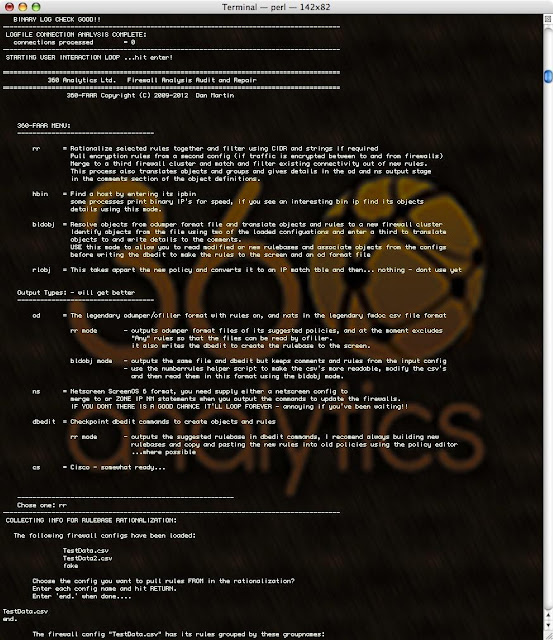