PwnStar - Script for multi attack (for all your fake-AP needs!) 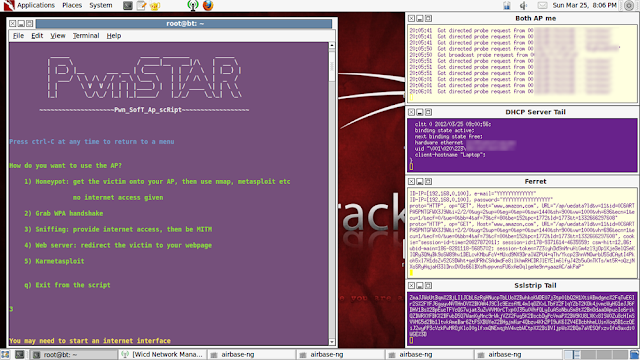 A bash script to launch a Soft AP, configurable with a wide variety of attack options. Includes a number of index.html and server php scripts, for sniffing/phishing. Can act as multi-client captive portal using php and iptables.  Launches classic exploits such as evil-PDF. De-auth with aireplay, airdrop-ng or MDK3.

1) Relies on auto-connections ie the device connnects without the owner being aware. You can then attempt to exploit it. Target the fake-AP ESSID to something the device has likely connected to previously eg Starbucks WiFi
2) Sometimes it is quicker to steal the handshake than sniff it passively. Set up the AP with the same name and channel as the target, and then DOS the target. Airbase will save a pcap containing the handshake to /root/PwnSTAR-n.cap.
3) Provides an open network, so you can sniff the victim's activities.
4) Uses apache to serve a webpage. There is an option to load your own page eg one you have cloned. The provided page (hotspot_3) asks for email details. Note the client is forced to the page by DNS spoofing. They can only proceed to the internet if you manually stop dnsspoof. DNS-caching in the client is a problem with this technique. The captive portal in the advanced menu is a much better way of hosting hotspot_3
5&6) Provides all the config files to properly set-up Karmetasploit and Browser_autopwn.

a) Uses iptables rules to route the clients. This is a fully functioning captive portal, and can track and block/allow multiple connections simultaneously. Avoids the problems of dns-spoofing. There are two built-in web options:
1) Serves hotspot3. Does not allow clients onto the internet until credentials have been given.
2) Allows you to add a personal header to the index.php. You could probably copy the php functions from this page onto a cloned page, and load that instead.
b) A captive portal which blocks the client until they have downloaded a pdf. This contains a malicious java applet. Includes a virgin pdf to which you can add your own payload.
c&d) Launches a couple of example browser exploits
e) Gives a skeleton framework for loading any browser exploit of your choice. Edit PwnSTAR browser_exploit_fn directly for more control.
Download PwnStar
Etiquetas: fake-AP, Kali Linux, Linux, PwnStar, Script
Share:
Entrada más reciente Entrada antigua
Loading...